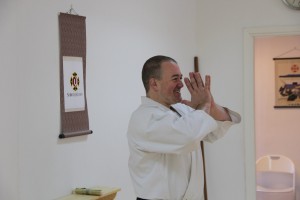 Steve Williams-sensei, shibu-chō of Harrow Shibu in England, visited Karlstad together with a number of members from Harrow

Over the weekend of 9th to 10th of February, we once again had a visit from Harrow Shibu. Steve Williams and an additional four kenshi from England visited and we organised a small gasshuku (training camp). The British flew to the Arlanda (Stockholm) airport, took a rental car to Karlstad and arrived on Friday afternoon. On Friday night it was pizza and Shorinji Kempo video at Anders house.

We had practice from 10:00 to 16:30 on both Saturday and Sunday. In addition to the members from Harrow and from our own branch we also had four members from Skövde Shibu that participated. On the Sunday we had the honour to have two members from Karlstad Studenters Shibu including Åke Olsson-sensei.

Below are some pictures and a few comments from some of the participants. 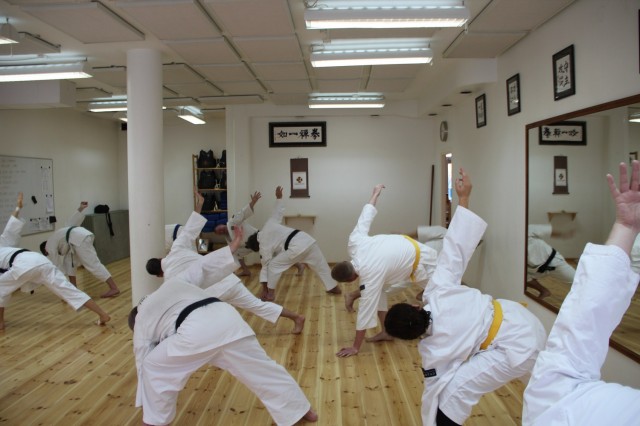 Steve-sensei leads the warming up 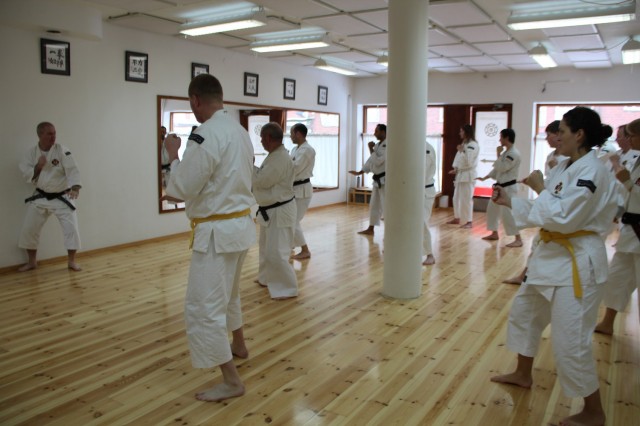 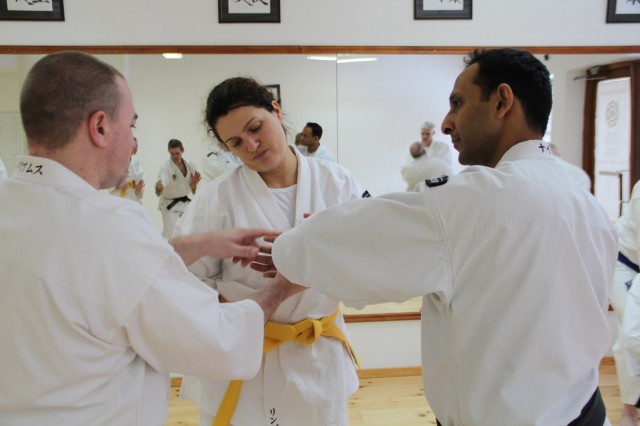 Steve-sensei is teaching Linda and Piyush 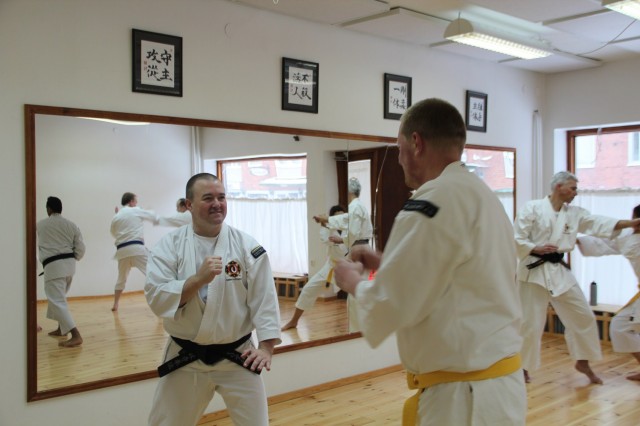 Steve-sensei had to face some big opponents, here in the shape of our own Mattias 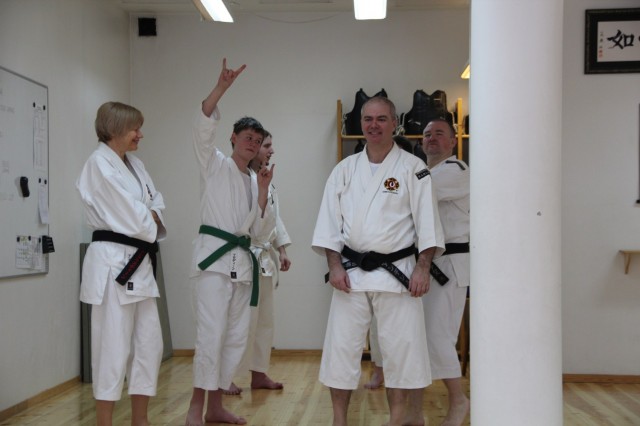 Simon is joking around when the camera shows up

Sebastian from Skövde practice nidan nuki with Piyush from Harrow

Piyush Naidu
Thanks to all Swedish kenshi who helped to make a very enjoyable and beneficial weekend. We were fortunate to receive a lot of technical instruction about a variety of techniques.
For me this made many techniques clearer and I felt I was able to execute them with more control and better effect. Consequently I have realised the importance of control throughout the entire technique. Something which I need to build on.
Aside from the training I had a fun and enjoyable time. We were treated well and made to feel welcome. I would encourage all kenshi to visit Karlstad and to train there if they have the opportunity. 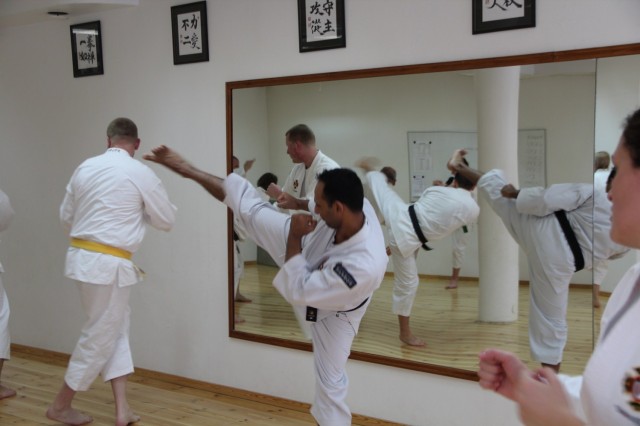 Piyush do a great mawashi geri during kihon 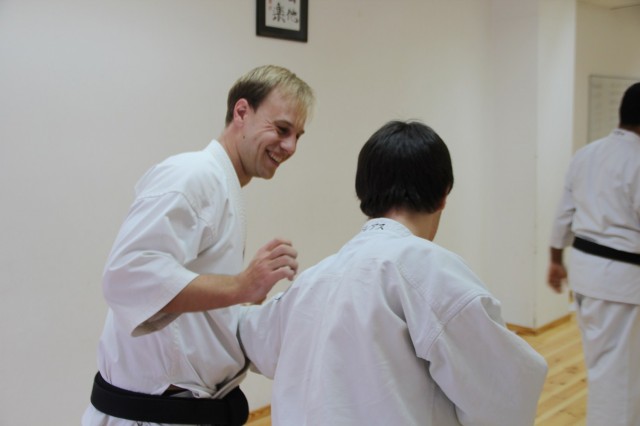 Peter from Skövde is enjoying the practice

Peter Thorvald
It has become a tradition for me to visit Karlstad in February when the British kenshi visit Sweden, a tradition that I value very high. Not only for the great opportunity for qualified practice, but also for the opportunity to meet fellow kenshi and build upon the great relationship that already exists between our federations. The weekend included both great practice and great socialization with food and drinks among friends. Count on me to be there next year too! 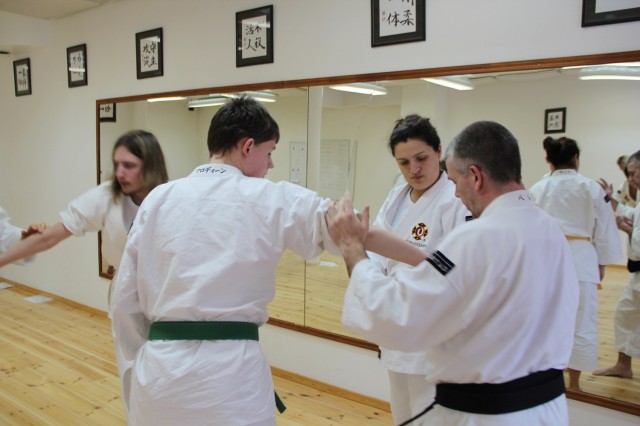 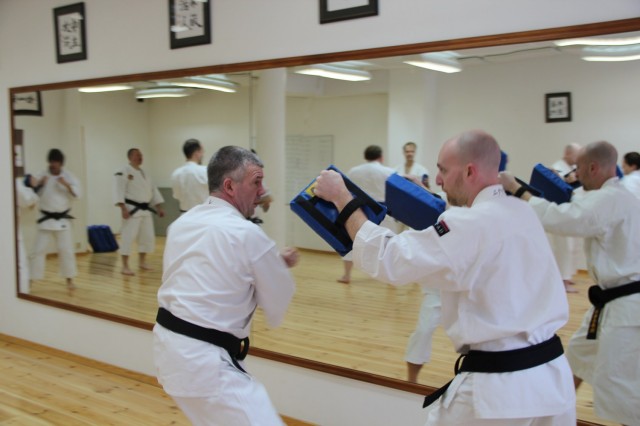 Pelle and Niklas practice hard with the mitts

Paul Browne
Attending the Karlstad gasshuku has been a brilliant start to 2013 for me. I was able to receive excellent instruction, renew old friendships and make new ones through a combination of serious training, shared laughter and fun. I look forward to maintaining the relationships built through future training opportunities made possible by our shared passion for Shorinji Kempo, and would like to thank Anders-sensei and the kenshi of Karlstad for making it such an enjoyable event. 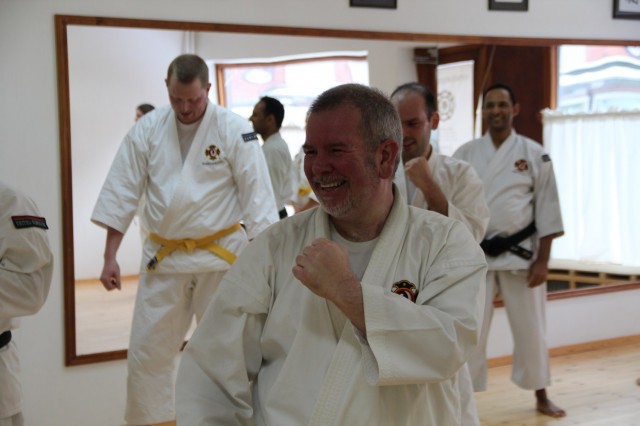 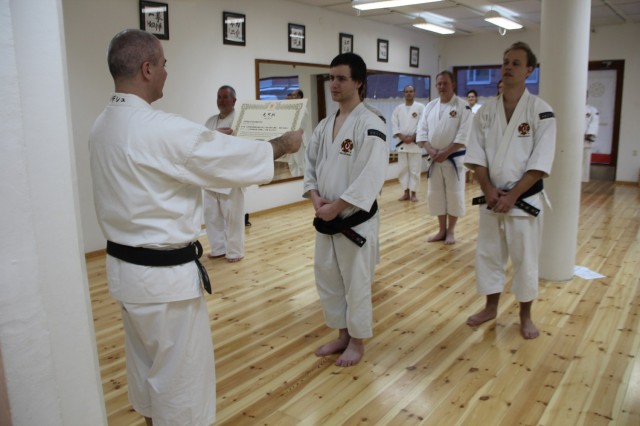 Andreas from Skövde received his inkajō (certificate) for his grading to shodan. The grading was done already during the summer but it took some time before the certificate arrived. 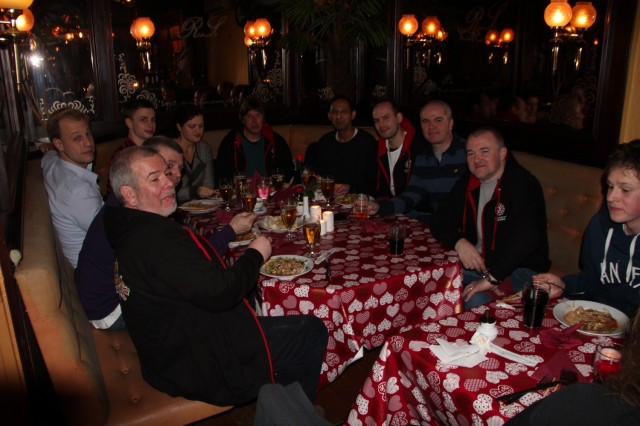 Dinner together on Saturday night 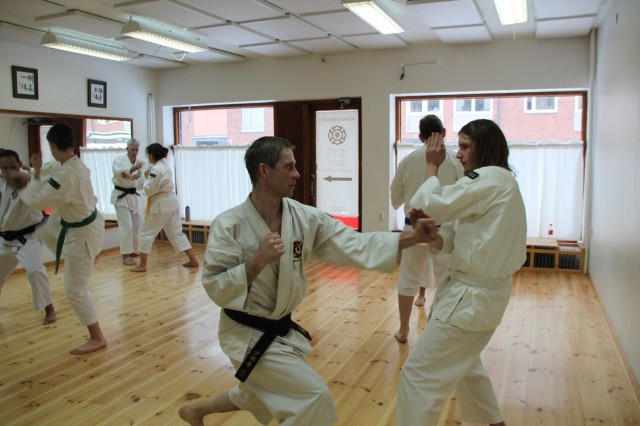 Åke-sensei practice with Sebastian from Skövde 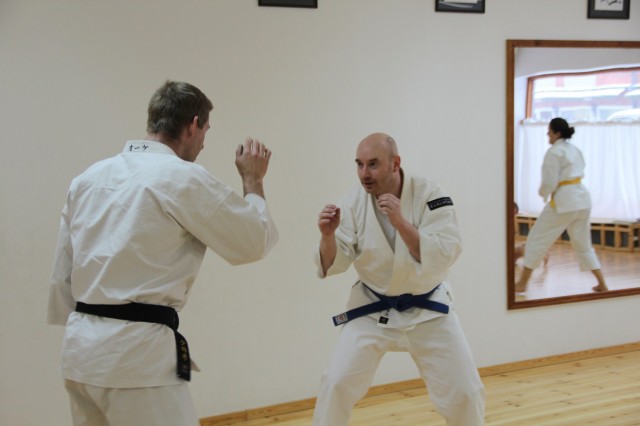 Åke-sensei and Magnus do “warming up randori” 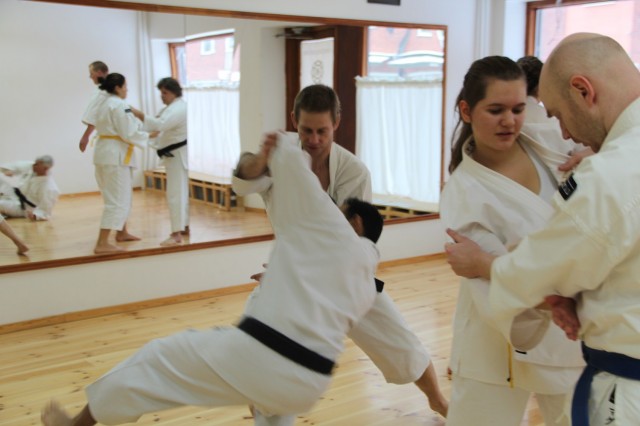 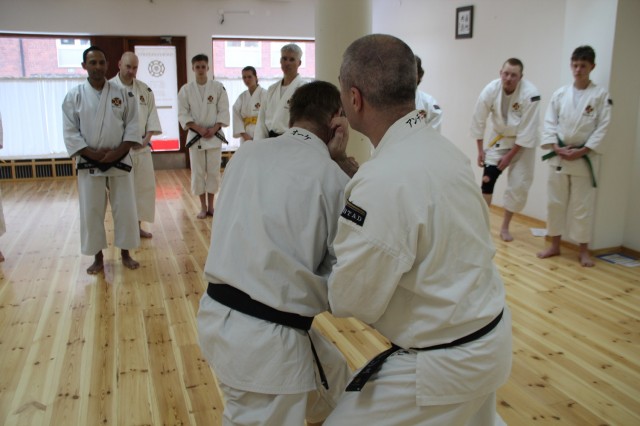 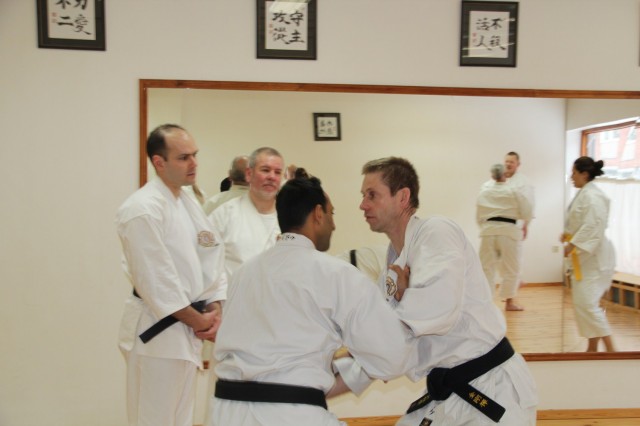 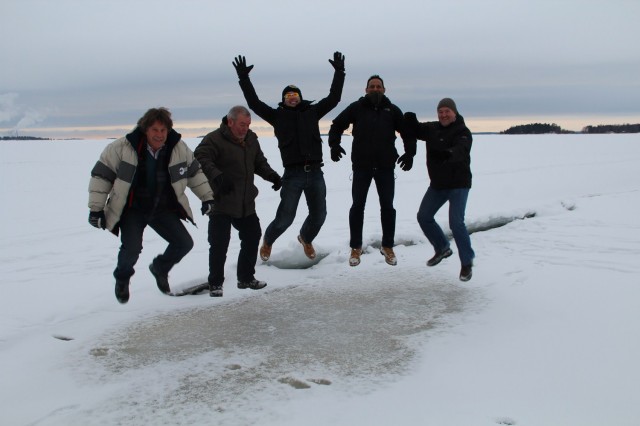 A traditional jump by the British out on the ice of lake Vänern (largest lake in EU, third largest in Europe, with 5 650 km²)

James Maddocks
I had a really great time in visiting the Karlstad Shorinji Kempo branch in Sweden. Flying in to Stockholm from the UK rain on an early morning flight it was great to see snow. Yes, it was cold (ish) but it never hit the -15 we expected and the warm welcome we received more than made up for it (I believe beer was involved). It was great to have the opportunity to have two full days training with the senior sensei of the Swedish Federation and their kenshi, make snow angels and walk on a mostly frozen lake. Saturday night gave us the chance to socialise over a beer at the ‘all you can eat’ BBQ restaurant until the small hours, nice to see that members of both the UK and Swedish took the ‘all you can eat’ as a literal challenge (I believe Graham won). It was also great that many kenshi from the surrounding area came to train with us giving a wonderful atmosphere in the dojo and the chance to train lots of different people each day; a thoroughly enjoyable experience. As an added bonus we were able to finish each day in the sauna, this is something we would definitely like to bring back in the UK.

I might not be able to use chop sticks as well as the rest of you but a little time and practise I’ll soon be able to eat as fast (maybe!), bit like Shorinji Kempo when you think about it…. 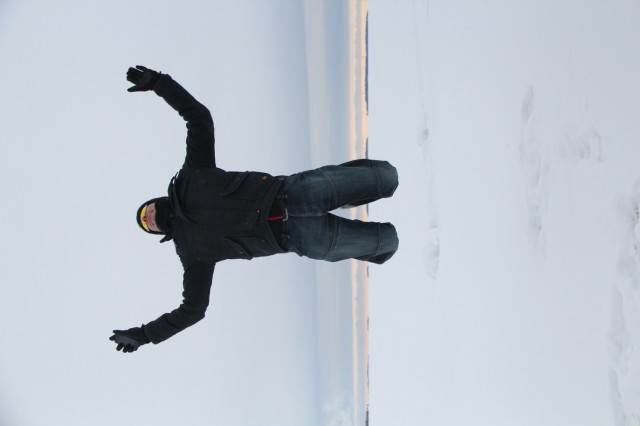 James do a giant jump on the ice of lake Vänern

Graham Cooper
5 people from England attended the Swedish weekend in Karlstad. A warm welcome helps to avert the cold -6 temperature. All the kenshi gave their time generously to help the weekend be both fun and educational , it is always good to get some of those strong arms to bend and find a different way to apply the techniques.

Thanks to Anders sensei and all that gave their time and effort to give a good experience.