Shorinji Kempo was founded in 1947 in the small town called Tadotsu, located in Shikoku, which is the smallest of Japan’s four major islands. The founder was a Japanese man named Doshin So, but often he is only called Kaiso, which means founder. He wanted to help to build up Japan after World War 2. 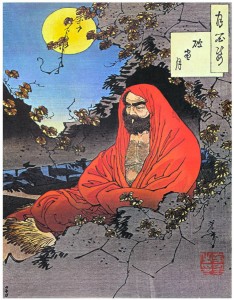 Tradition tells us that it was Boddhidharma (the founder of Zen) that brought fighting techniques (Indian kempo [印度拳法], tenjiku nara no kaku [天竺那羅之捔], or ekkin gyō [易筋行]) to China 1500 years ago, after he left India to pass on the correct teachings of Buddha and ended his journeys at the Songshan’s Shaolin temple in what is known today as the province of Henan. Later, many varied martial arts arose from these techniques and spread all over China.

1928 Kaiso travelled to China where he learned various techniques from different masters whom he met in his rather unusual line of work. During a visit to the Shaolin temple with his teacher Kaiso saw a mural with Indian and Chinese monks who trained together. This mural inspired him to create a system where you train and develop together.

Mural painting at the Shaolin temple that inspired Kaiso to establish Shorinji Kempo.

In August 1945 Japan was defeated in war and in the middle of this turbulence experienced Kaiso the terrible acts that people could perform. Kaiso discovered that the events affected much of the character and mindset of people in a position of influence. He expressed this insight with “The person, the person, the person, everything depends on the quality of the person” (“Hito, hito, hito, subete wa hito no shitsu ni aru” [人、人、人、すべては人の質にある]). He noted that “if society is managed by humans, then the only true peace to come from nurturing kindness, courage and a sense of justice among as many people as possible.” This experience made him decide to try to help rebuild their country by educating its people and in the summer of 1946 he returned to Japan. 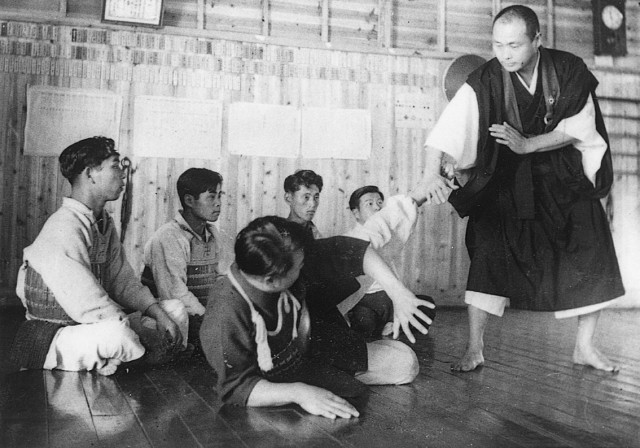 Kaiso teaching in the early days of Shorinji Kempo.

On May 12, 1980, 33 years after he founded Shorinji Kempo, Kaiso passed away due to heart problems. The leadarship of the organisation was taken over by the current shike dai ni sei Sō Dōshin [師家第二世 宗 道臣] (second shike Doshin So, or Yuuki So which is her name) who is the daughter of Kaiso and she continue with Kaiso’s task and Shorinji Kempo continues to evolve.

The first Shorinji Kempo branch in Sweden was established in 1970. You can read more about the development in Sweden here.

Another successful grading in the children's group

The children's group is now in full swing again, t