Home » Articles » About the Grading System

In Shorinji Kempo, we have, as in most other Japanese budo (martial arts), a grading system. The grading system (kaikyū seido [階級制度]) is set up as a step by step curriculum so that it is easier to learn and it is based on the idea of zenzen shugaku [漸々修学], ie. step by step learning. All branches in the whole world follows the same kamokuhyō (curriculum), which also specifies minimum requirements for how long time it must be between gradings, and how many practice sessions you need before you are qualified to test for the next level. In Shorinji Kempo, there are three different types of ranks, they are explained in more detail in the following paragraphs. All grading certificates, for both kyū as well as dan ranks, are issued by Shorinji Kempo Hombu. 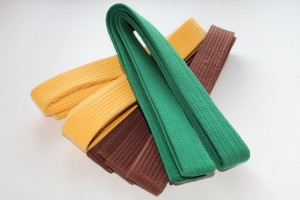 Coloured belts (obi) which indicates the kyū rank of kenshi

The first type of grading one encounter is bukai [武階], “martial rank”, which means kyū and dan ranks, just as in most other martial arts. These gradings include both a practical test of the techniques, as well as a theoretical test. For kyū grades it is a written homework and for dan grades it is a written homework and a written test on the day of the grading. For higher dan grades there is also an interview.

For children that are 9 years old or younger there are eight kyū ranks and for all who are 10 years or older there are six kyū ranks. Children that are 12 years or younger have a somewhat different kamokuhyō (curriculum) where all so called gyaku waza (techniques that attacks joints) are removed. Kyū ranks begin with a high figure and goes down to first kyū which is the level before black (dan grade). When one are new one wear a white belt, this is called minarai (beginner). The youngest children have yellow belt for the ranks of 8th & 7th kyū, then there are green belt for the grades 6th, 5th, & 4th kyū, and brown belt for 3rd, 2nd & 1st kyū. Dan ranks begin with 1 dan (shodan), 2 dan (nidan) and so on, up to 9 dan which is the highest bukai rank in Shorinji Kempo. 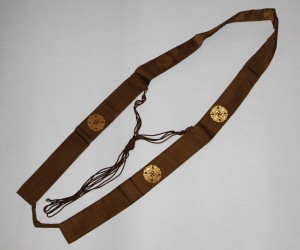