The branch started as an informal activity when some youths started to train together. It was Bengt Amnehagen who was the one who was the acting instructor at the time. Bengt had received some training under Roy Colegate sensei, and participated in some training camp in Shorinji Kempo. In the autumn of 1983 he gathered some school friends who began training under his direction in a relatively informal setting.

Already in the autumn of 1983 Pontus Liljequist began, Pontus later become the shibu-chō in Stockholms Studenter Shibu, and Pelle Svensson to train with Bengt. Anders Pettersson and Åke Olsson began training in January 1984, Mikael Sjödin was also practising during this time. Mikael has not been active for many years although he made occasional short comebacks over the years. Pelle has had some periods of rest from the practice, but since a number of years he is a regular member of the branch. Peter Malmberg also trained with us in the beginning, but after a year he began to train Taekwondo, where he is now 5 dan and the driving force of the club Samurang Taekwondo.

Pictures by Pelle Svensson, from about 1985. 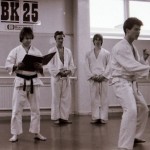 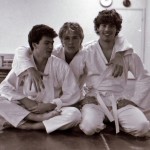 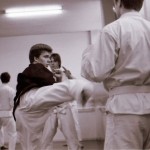 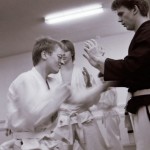 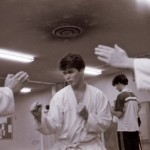 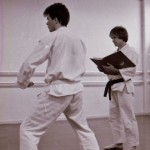 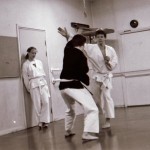 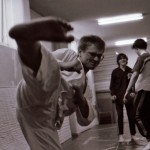 Since no one was high enough graded to formally lead an official Shorinji Kempo branch all kenshi were registered as members of Bromma shibu, under the guidance of Roy Colegate sensei.

As often as possible everyone went to Stockholm (a little over 300 km away and about 3.5 hours drive) to train and the club also organised weekend training camps in Karlstad, often a few times per semester, with instructors from Stockholm and Visby (which at this time were the only places where there was official Shorinji Kempo branches). Roy sensei came often, but the branch also received a lot of help from Leif Larsson sensei, at the time shibu-chō i Visby shibu.

In 1987 Kawahara Tomokazu sensei, kenshi from Rakutō dōin and at this time 4 dan seikenshi but currently 6 dan junhanshi, spent almost a year in Sweden. During this time he lived in Visby, but also came on visit to Karlstad and taught at weekend camps. This was the branch’s first direct contact with Rakutō dōin. 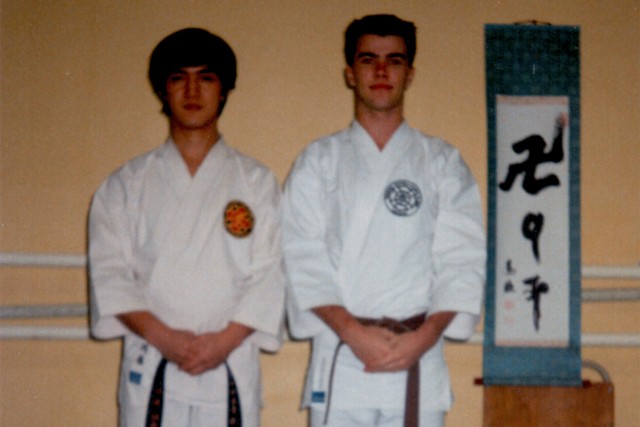 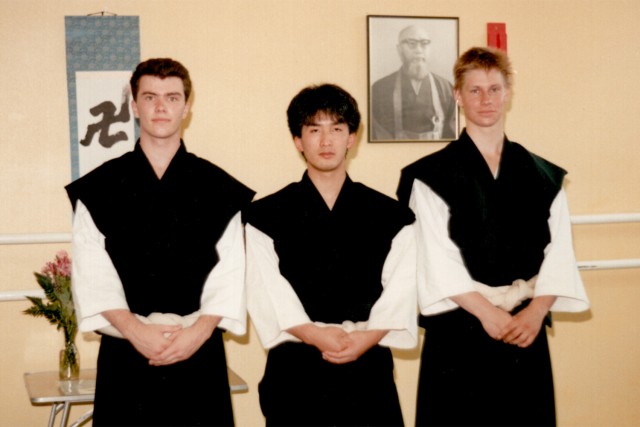 Morikawa Kazuhito-sensei with Anders to the left and Åke to the right, when they held a demonstration in Karlstad 1988.

In September 1989, Anders Pettersson and Åke Olsson graded to shōkenshi 2 dan during an international training camp at the Shorinji Kempo Hombu (headquarters) in Japan. This was the first time that members from Karlstad was in Japan and visited Hombu, during the same trip some time was also spent in Kyoto to train in Rakutō dōin. 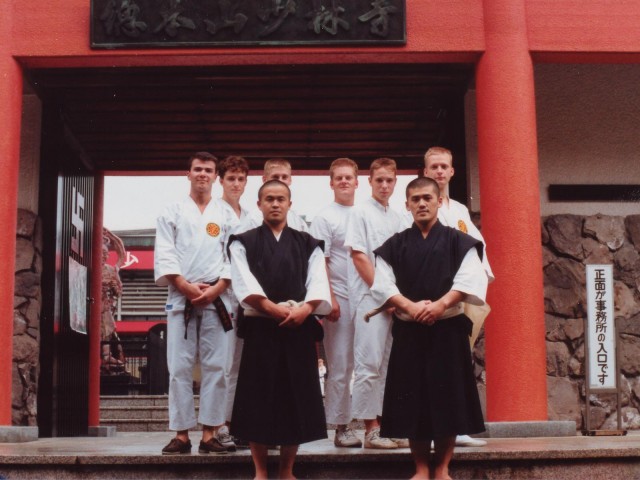 Swedish kenshi in front of niōmon (the niō gate) at Hombu in 1989. At the front stands Shimura sensei and Fujii sensei, Anders is in the far left while Åke is directly behind Shimura sensei.

After returning from Japan all the application documents was filled out and submitted to headquarters in Japan and during the spring of 1990 Shorinji Kempo Karlstad Shibu was officially registered in the World Shorinji Kempo Organization as a Shorinji Kempo shibu (branch). In the same period the branch also became a member of the Swedish Budo Federation  (now called Swedish Budo & Martial Arts Federation, SB & K). Anders became the shibu-chō and Åke became the fuku shibu-chō, Roy sensei served as kantoku (coach) and was responsible for all gradings, etc. It is necessary to have a kantoku if the shibu-chō have a lower rank than 3 dan.

In 1992 Anders Pettersson lived 3 months in Kyoto and received instructions from Morikawa Zeoh sensei in Rakutō dōin. In September 1993 it was again time for a Kokusai Taikai (international Taikai) and Anders and Åke graded to chūkenshi 3 dan at Hombu. In doing so they became independent and were able to grade the members of Karlstad on their own. 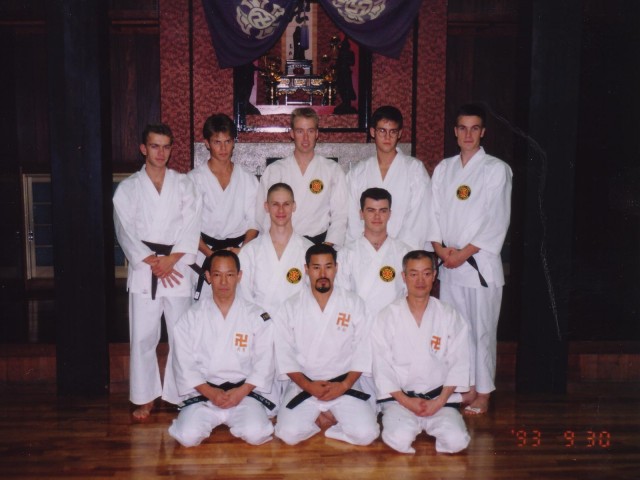 Swedish kenshi in Hombu dōin in 1993. At the front sits Arai sensei, Kawashima sensei and Yamasaki sensei, directly behind them are Åke and Anders. At the far right in the back row is Pontus Liljequist.

In 1995 the branch had a guest instructor for about 6 months when Kawashima Hiroshi, a kenshi from Rakutō dōin that at this time was 4 dan seikenshi and now is 6 dan junhanshi, lived with us in Karlstad. Anders got to know Kawashima Hiroshi sensei during the time he lived in Kyoto, and when Kawashima sensei finished university, it was a good opportunity to get out and travel a bit.

Ever since the first contact in the late 1980s, the branch has maintained contact with Rakutō dōin and when travellin to Japan Rakutō dōin is always visited. Sweden and we in Karlstad has also received regular visits by Morikawa Zeoh sensei or his sons and students over the years.