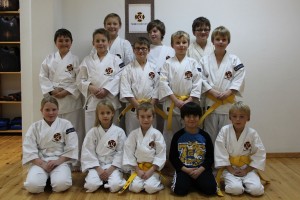 Grading for the children’s group in December 2011

On Tuesday, 6th of December we had a grading for the Children’s group (shōnenbu). There were a total of 13 children who graded, seven to the first rank 8 kyū, three to 7 kyū and three to 6 kyū.

All the kids did very well and passed the grading with good results.

In these times, we try to minimize switching partn