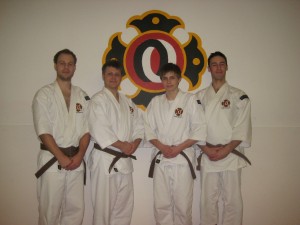 Those who graded to Shodan. From left: Peter Thorvald, Andreas Laestadius, Erik Ohrn and Fedrik Fall.

On Saturday 11th of December there as a dan examination in Gothenburg.
We were three people from our branch that travelled down to Gothenburg early on the Saturday morning. The three were Anders Pettersson, our branch’s shibu-chō, who also should be one of the examiners, and Erik Öhrn who was going to do his grading. Joining in to the trip to Gothenburg was also Pelle Svensson.
From our branch we had Erik who was going to try the test for junkenshi shodan (1 dan, black belt). There were four people who tested for shodan, Fredrik Fall and Andreas Laestadius, both from Gothenburg (although Fredrik started his practice with us in Karlstad before he moved to Gothenburg), Peter Thorvald from Skövde and our own Erik. The grading took almost three hours and all the participants were really tired afterwards. At the same time tere were also a number of kyū examinations, so in total there were 11 people who graded. For those that weren’t testing it was possible to do some regular practice that was held by a few of the yudansha (dan graded) that was there. 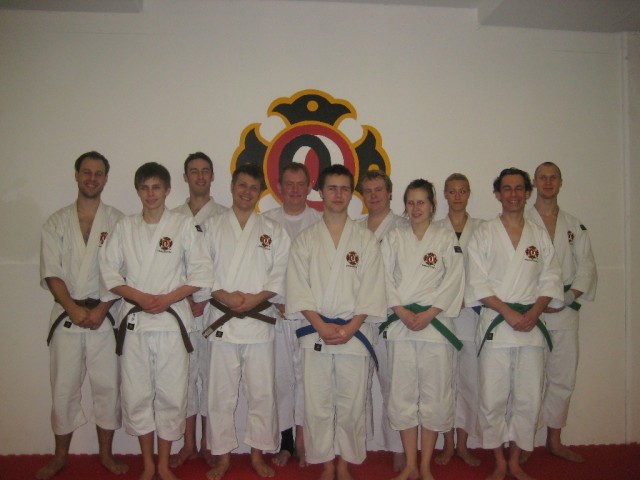 After the grading Göteborg Shibu had arranged with lunch in the dojo before it was time to drive off to a cabin in Härryda just outside of Gothenburg. The day was finished with a dinner together and socialising in front of the big open fire place and the members of Götebrg shibu had a meeting regarding the planning of the upcoming term. Then there were time for some sauna and a dip in the ice hole that was made in the lake next to the cabin.

It was a very nice day together with other kenshi from Gothenburg (Göteborg) and Skövde, a big thanks to those in Gothenburg who arranged everything very well.

And finally but not least a big congratulations to Erik (and the others) who passed their grading test to shodan.